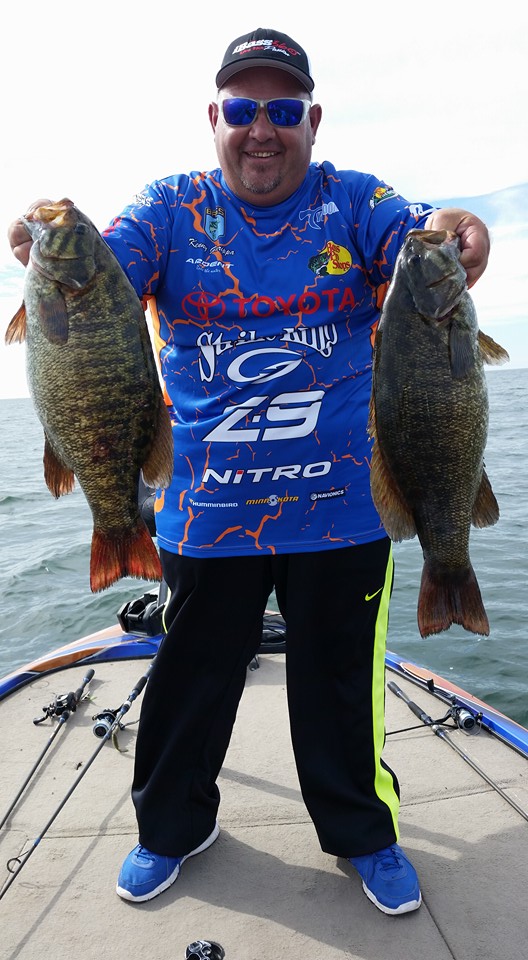 I love fishing big water for big bass. When Freddy Roman suggested we head up to Lake Ontario, he did not have to twist my arm. When people hear about fishing the Great Lakes, a lot of them immediately think you are talking about trout and salmon. Don’t get me wrong, these are good sport fisheries, but when it comes to pound for pound heart stopping, take your breath away action, it is bass fishing that really gets a fisherman’s blood pumping. The smallmouth fishery in Lake Ontario has had its ups and downs. The cormorant population has exploded causing decimation amongst the young of the year in some parts of the lake.

Zebra muscles have caused some issues with micro-organisms that sustain the bait population but at the same time they have had a positive impact on water clarity and the vegetation needed to support good bass habitat. Likewise there are concerns about Gobies invading the Great Lakes but they are also great Smallmouth food. So we take the good with the bad. Generally, from the south-central shore to the mouth of the St. Lawrence, the smallmouth population is enjoying some good times.

Now you will get some arguments, but if you ask fishermen in the know, people like charter Captain Bill Lortz and professional fisherman Jim Root, they will tell you that Lakes Erie and Oneida hold some giant smallmouth, but when it comes to really legendary smallmouth fishing, they will say that the waters of Chaumont Bay, Henderson Bay and some of the smaller bays in and around that region could easily be the best smallie water in the state. A lot of anglers are intimidated by what can be huge rolling waves on Ontario.  But it can also be like no other place you can fish for bass- crystal clear water, a great rocky bottom, and gravel points that stack the smallmouth like the condos of Miami stack wealthy, retired Northerners.  Each of the many bays in the eastern part of the lake have their own peculiarities but generally they are all good fisheries, each with a smattering of walleyes, pike and  largemouth to  compliment the plethora of football sized smallies.